Not one, but two medals! International Latino Book Awards Medals | 2019 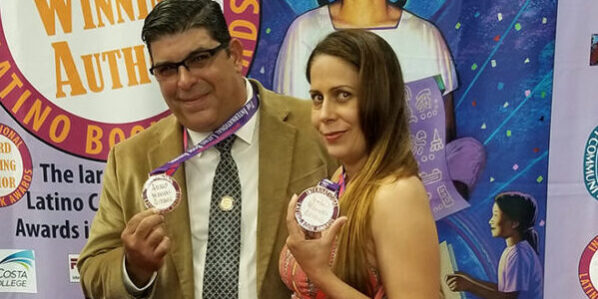 A Reflection of the Best of Books By & About Latinos

The International Latino Book Awards is a major reflection that the fastest growing segment of the USA has truly arrived. The Awards are now by far the largest Latino cultural Awards in the USA and with the 261 finalists this year in 95 categories, it has now honored the greatness of 2,897 authors and publishers over the past two decades. The size of the Awards is proof that books by and about Latinos are in high demand. In 2019 Latinos will purchase over $725 million in books in English and Spanish.

The 2019 Winners for the 21st Annual International Latino Book Awards are another reflection of the growing quality of books by and about Latinos. About a third of the winners were from major U.S. and int’l publishers, a third from medium sized publishing houses, and a third were from small publishing houses or even self published. In order to handle this large number of books, the Awards had 227 judges in 2019. The judges shared how hard it was because there are now so many great books being published. Judges included librarians, educators, media professionals, leaders of national organizations, Pulitzer Prize Winners, and even elected officials. The Awards celebrates books in English, Spanish and Portuguese. Finalists are from across the USA and Puerto Rico, as well as from 18 other countries.

Emcee Nora de Hoyos Comstock, the founder of Las Comadres para las Americas, stated, “I challenge everyone here tonight to NOT learn about at least 2 or 3 books you will want to read. It is impossible. Most of you will go home with a long list of TO READS. Chancellor Francisco Rodriguez of the Los Angeles Community College District, the largest community college district in the USA, emphasized the ties between the right books and a successful education. Other presenters highlighted books that changed their lives and the importance of books by and about Latinos. The many winners shared the importance of reading and books; gratitude for all those that have helped them; and how these Awards have changed their lives and careers.

The Awards are produced by Latino Literacy Now, a nonprofit organization co-founded in 1997 by Edward James Olmos and Kirk Whisler. Other Latino Literacy Now programs include the upcoming Latino Book & Family Festival at MiraCosta College in Oceanside will be our 67th. The International Society of Latino Authors now has 140+ members. Education Begins in the Home has impacted literacy for 100,000+ people. More than 70 episodes of the Latino Reads Podcast have now aired. The Award Winning Author Tour has 10+ events around the USA each year. Latino Literacy Now’s programs have now touched

well over a million people. Over 350 volunteers will donate 14,000+ hours of service this year.
The Awards Ceremony was held September 21, 2019 in Los Angeles at the Los Angeles City College. The event was hosted by the Los Angeles Community